Ray Hudson is the author of Moments Rightly Placed. He is also the author and editor of several scholarly books on the Aleutian Islands. A retired public school teacher, he is a woodblock artist and poet who lives in Vermont.

Other books by Ray Hudson 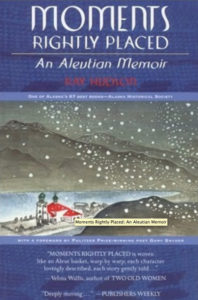 This book grew from an attempt to write about learning to weave Unangan baskets under the master weaver Anfesia Shapsnikoff. It became a memoir after the publisher (Epicenter Press) insisted I include more personal matters. That request (along with marketing sense) torpedoed the original title: The Bays of Beaver Inlet: A Manual on Aleut Basketry. (It took Lael Morgan, a friend and one of the owners of Epicenter Press, a year to get up the courage to even read a manuscript with that title.) Eventually it became what it is: the account of a novice stepping into a world of unexpected joys and sorrows.

Gary Snyder, long one of my heroes, came to Unalaska, invited by the poet Jerah Chadwick who was then running the regional branch of the University of Alaska. He stayed with Shelly and me, and so a few years later I asked if he would write a word or two about Moments. He was, as is his nature, exceptionally generous. The book was, he wrote, “unencumbered by theory or ecstasy.”

“This remarkable, fresh book is an understated manual for how to learn a place, how to connect with the old-timers, how to wait ‘til deemed ready, and how to undertake a practice that will invisibly transform you….What we need to know about the fit between place and culture, about “real human beings” in a way, is all here. This book is a lovely, tightly woven little basket in its own right.” – Gary Snyder

In 2006 the Alaska Historical Society included it in their publication The Alaska 67: A Guide to Alaska’s Best History Books. In 2008 Epicenter Press came out with a second edition. 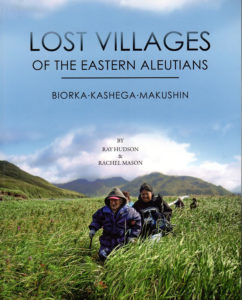 This book is available free on-line at

As part of the mission of the Aleutian World War II National Historic Area, Rachel Mason, the Senior Cultural Anthropologist for NPS, Alaska Region, joined forces with the Ounalashka Corporation at Unalaska to undertake extensive documentation of the villages impacted by World War II. This book became part of that project. I wrote a history of the three primary villages in the eastern Aleutians that were, in effect, terminated as a result of the war. Based on historical research and interviews with former village members, the book is a detailed account of both tragedy and resiliency. Rachel wrote an epilogue, a moving account of visits back to the three village sites by former residents and their descendants. 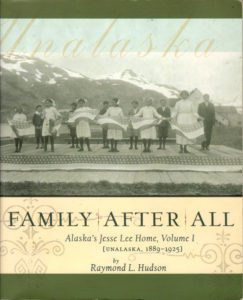 Jackie Pels, the owner and publisher of Hardscratch Press, asked for a bit of information about the Jesse Lee Home, a boarding school and orphanage run by the Methodist church at Unalaska from 1889 to 1925. That bit turned into a book. The children placed in the Home by parents or circumstances were fortunate for the most part. The matrons, superintendents, and doctors who ran the home were products of late 19th century and early 20th century assimilation agendas that so often led to the extinction of Native languages and customs. Even so, a number of those stationed at Unalaska took a genuine interest in Unangan culture and tried, at times, to be inclusive in terms of the local culture and the dominant religion, Russian Orthodoxy. Agnes Sowle Newhall and Dr. Albert W. Newhall dominate the story. Many years later, Anfesia Shapsnikoff always spoke about them with fondness.

Of course, there were less sympathetic characters working at the Jesse Lee Home. I had to bite my tongue a few times when describing them.

It’s a long book (400 pages), but it includes a list of all the known residents—an invaluable resource for those doing genealogy or other studies. 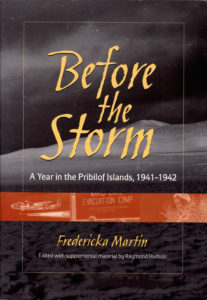 by Fredericka Martin, edited with supplemental material by Raymond Hudson.

Fredericka Martin was a passionate defender of the residents of the Pribilof Islands from the time she and her husband, Dr. Samuel R. Berenberg, arrived at St. Paul in 1941. She began this book in 1942. In 1946 and 1960 she published two books on the islands, but this manuscript—more personal and revealing—remained unfinished. 1941-1942 was a pivotal year for the Pribilof Islands. The year ended with the evacuation of all residents as World War II swept over the Aleutian Islands. This manuscript is among Martin’s papers at the Alaska and Polar Regions Collections and Archives at the University of Alaska, Fairbanks. In editing it, I incorporated sidebars from Martin’s typed journal to provide moments of immediacy. I attempted to track down all her quotations (and usually succeeded). Of importance is the inclusion of Dr. Berenberg’s annual medical report for 1941-1942 that reflected the conditions at the start of the relocation period.

Fredericka Martin’s daughter, Tobyanne Berenberg, was a constant inspiration as I worked on this project. The book’s inclusiveness owes much to her generosity.

I am so happy to have been able to assemble the fragments of Lucien Turner’s writings about the Aleutian Islands into a single volume. His life was plagued with failure and disappointments. Most of his writing on the Aleutians has disappeared. I keep hoping that someday, somewhere, a large manuscript will surface. Until that happens, we must content ourselves with what he included about the islands in Contributions to the Natural History of Alaska, published in 1886 by the Smithsonian Institution, along with a few short articles and the jumbled mess he called a descriptive catalog. I took all these pieces and tried to weld them into something coherent. The introduction provides a background for and an evaluation of his work. It describes life in the Aleutians a few years after the 1867 Alaska Purchase. Turner is important because he did more than pass through the region on a Revenue Cutter. He lived at Unalaska, Atka, and Attu for considerable time in the late 1870s and early 1880s.